FiveToNine's designer Sue was a founding director of The Lenox Project from 2012–2019. The project began as a positive response to the proposed redevelopment of Convoy's Wharf, site of the Deptford Royal Dockyard, founded in 1513 by Henry VIII. Lenox was one of many ships built and launched at Deptford, but the only one for which the design plans exist, so that a replica could be built and sailed.

Build The Lenox became part of planning conditions when permission to develop the site was granted in 2014 by Mayor of London Boris Johnson to Hong Kong conglomerate Hutchison Whampoa to build 2400 luxury homes. Seven years later, no homes had been built and the project still had no access to the site.

All promotional work by FiveToNine was pro-bono. Sue resigned from the charity after a move to Hastings in 2019. 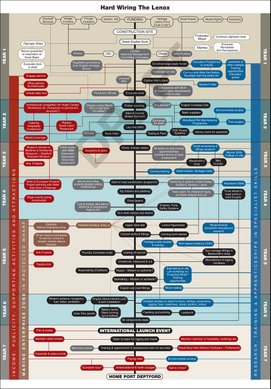